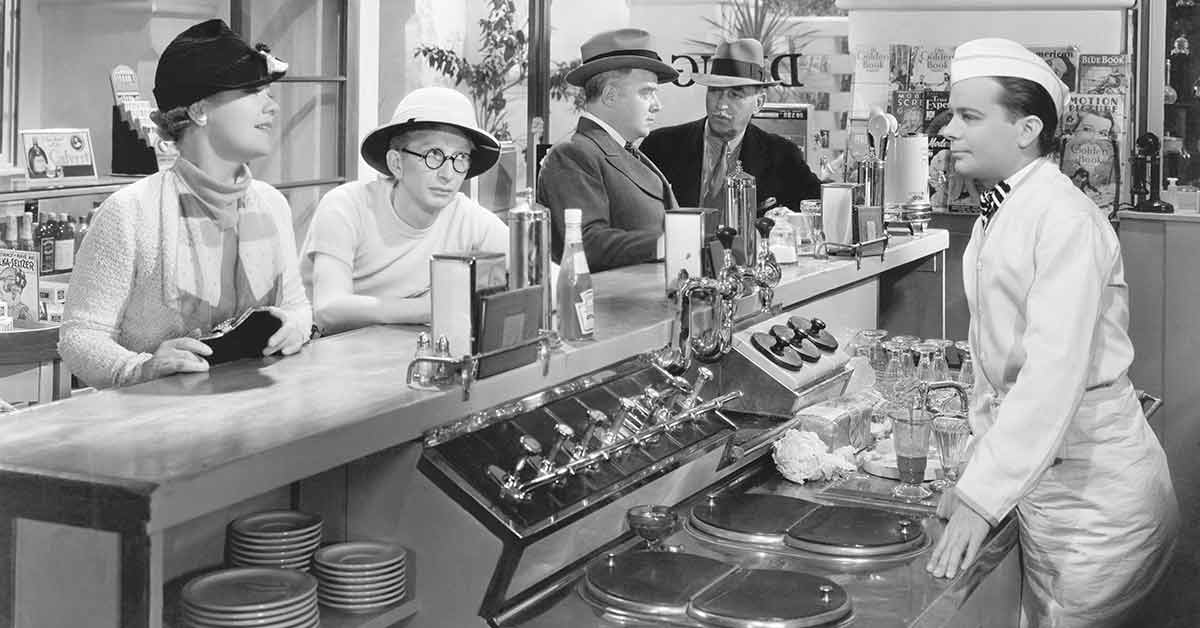 When you think of the mid-century years—especially those iconic 1950s—no hangout surpasses the soda fountain as a symbol of the times. Many soda fountains were counter-service operations in drugstores, and others were standalone soda shops, otherwise known as malt shops.

Soda fountains weren’t merely places to get some sweets and eats. They were popular gathering places, particularly for teenagers and young adults, and even epicenters of social life in some communities.

Here’s a quick look back at these quintessential mid-century establishments.

While soda shops are so closely associated with the 1940s and ’50s, they certainly predate those decades. The soda fountain machine that vends soda goes back more than a century prior.

In the early 1800s, devices were developed that added carbonation to water. This grew out of the health fad of the time for drinking mineral water. Throughout the mid 19th century, various innovations and recipes came along to add flavor. In 1903, the first iceless soda fountain machine was introduced.

Concepts similar to the classic soda fountain shop started popping up in drugstores shortly after the turn of the 20th century. Light lunches were offered via counter service to bring in business at the lunch hour.

When prohibition rolled around in 1919, soda shops became considerably more popular as replacement hangouts for bars. Some even developed a slightly unseemly reputation as places to score illicit beverages. But once prohibition ended, this changed, and soda fountains quickly took on a more wholesome, family-friendly reputation.

Soda fountains in drugstores typically sold fountain sodas, egg creams, ice cream sodas, milkshakes, chocolate malteds, ice cream, and often a limited selection of snacks and sometimes light meals. The counter was manned by a server called a soda jerk. Soda shops occupying their own storefronts had all the same, plus they often featured a larger menu with items like sandwiches, burgers, and other diner-type fare.

While they had many different looks, especially in drugstores, there are some classic soda fountain décor elements that endure. For example, there’s the black-and-white checkered floor, long marble-top counter, marble tabletops, chrome swivel stools and chairs with red seats, chrome fixtures, gooseneck soda spouts, and jukebox.

Kids and teens often stopped into their neighborhood soda shop after school and on the weekends. It was the perfect place for socializing and hearing current records, including the newly emerging rock ‘n roll genre. Soda fountains were also a prime date destination.

Soda fountains experienced a sharp decline in the 1960s. Fast food restaurants started significantly cutting into their business. Also, the rise of commercially available ice cream and bottled sodas made these treats conveniently accessible outside the soda shop.

Even though soda fountains didn’t survive beyond the mid-century years as a cultural staple, they still conjure such powerful nostalgia. They’ve even begun to experienced a bit of a resurgence in the 21st century. Most large US cities have one or more throwback soda shops these days. Seek one out at your earliest convenience!

Love mid-century era culture? So do we! Make sure you don't miss any of our original content about it by subscribing to receive it all in a convenient monthly email.