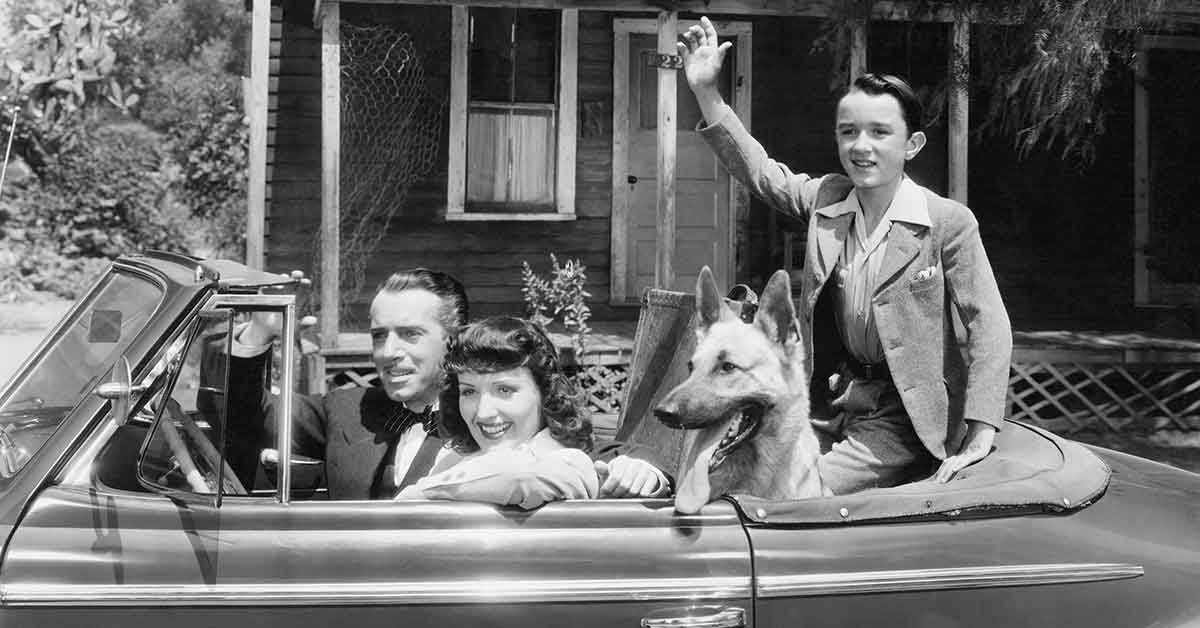 People love dogs. Their domestication for work and for companionship dates back to antiquity. “Man’s best friend” is no exaggeration. Today, it’s estimated that between 37 and 47 percent of all US households have at least one dog, and that Americans own somewhere between 70 and 80 million dogs, according to the ASPCA.

It was during the mid-century years—particularly starting right after WWII—that pet ownership started skyrocketing in America. While dogs weren’t uncommon before that, the booming middle class and mass migration to the suburbs in the late 1940s and early 1950s greatly facilitated taking in a dog.

Increasing numbers of homes had big yards for dogs to hang out and play in, plus the neighborhoods were ideal for taking canine companions out for daily walks. Also, the general population had more disposable income to accommodate additional mouths to feed, buy supplies, and otherwise provide proper care. At the same time, the first dedicated pet stores began opening up and commercially available pet food became widely available, making it much simpler to have a dog.

We’ll start off with a point of comparison. The top 5 most popular dog breeds so far in the 2010s, in descending order of their current rank, are:

Most Popular Dog Breeds in the 1930s

The 1930s were the last decade in which the Boston terrier would be one of the top 2 most popular breeds in the US. It would enjoy only one more decade in the top 3 (see below). This was the first—and for a long time, the only—American pure-bred dog breed. It quickly achieved enormous popularity early in the 20th century, and was considered the most chic and desirable breed through the 1910s, ’20s, and ’30s.

Most Popular Dog Breeds in the 1940s

As mentioned above, the ’40s saw the Boston terrier’s decline as America’s favorite dog. The Cocker spaniel climbed to the first slot for the decade—a position it wouldn’t hold again until a resurgence in the 1980s.

Unfortunately, there’s an ugly side to the Cocker spaniel’s crazy popularity during a time when demand for dogs went through the roof. These circumstances largely prompted the emergence of “puppy mills.” These are profiteering, irresponsible breeders who churn out puppies as fast as possible, including through inbreeding, often keeping them under inhumane conditions.

Most Popular Dog Breeds in the 1950s

This decade was the peak of the beagle’s popularity in America. As the 1950s are the most iconic mid-century decade, the case can be made for the beagle as most classic breed of the mid-century era. Charles Schultz’s comic strip Peanuts made its debut on October 2, 1950, syndicated at the time in nine US newspapers. In the third strip, published on October 4, 1950, Americans were introduced to a famous beagle named Snoopy.

Most Popular Dog Breeds in the 1960s

This decade also marked the start of a trend toward mid-size and large breeds being the majority of the most popular dogs; previously, Americans mostly favored small breeds and a few mid-size ones. Poodles perfectly embodied the idea of the chic designer dog, notably appearing often in fashion magazines. This fueled its desirability, especially among the upper class.