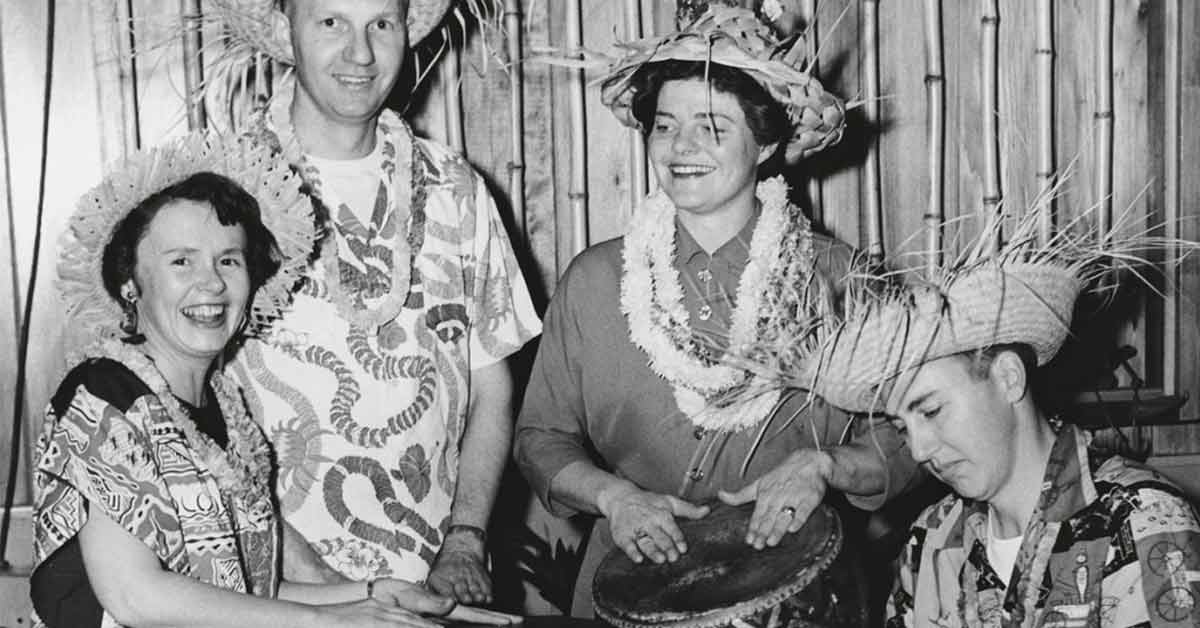 In the 1950s and early 1960s, America was swept up in a tiki culture craze based on a loose grasp of Polynesian, Maori, and Pacific Island culture. It permeated many areas of life, including bar and restaurant design, themes, and menus; home décor; party motifs; music, film, and television; and other aspects of pop culture.

Endless sunshine, beautiful beaches, laid-back ukulele music, grass skirts, bamboo structures, exotic fruits, sweet cocktails, and all the rest was highly appealing in the post-WWII years. The middle class was booming and Americans felt generally good and optimistic about their lives and country. They had disposable income to travel and commercial flights to Hawaii were newly available, and it was a trendy trip to take. It also helped that many WWII veterans had recently spent time in the South Pacific and returned home with experiences, stories, and souvenirs that seemed so foreign and intriguing.

Ernest Raymond Beaumont Gantt was a Texas native who pretty much single-handedly launched the tiki culture craze in the US. After spending a few years exploring Caribbean and South Pacific islands, he moved to Hollywood. There, he opened the tropical bar and restaurant Don’s Beachcomber Cafe, which was soon renamed Don the Beachcomber, in 1934.

Don the Beachcomber was decorated in the now-classic tiki style, showcasing many items Gantt acquired during his South Pacific travels. It specialized in strong rum cocktails inspired by Gantt’s adventures, and is generally acknowledged as introducing the entire concept of tropical cocktails to the American public. It also served fairly straightforward Cantonese cuisine, which isn’t noteworthy today, but it was new and exotic to Americans at the time.

It was here that two famous cocktails were invented—the mai tai and the zombie—as well as the pu pu platter. Well, Trader Vic’s (see below) also claims to have invented the mai tai, but the majority of qualified sources seem to allow credit to Don the Beachcomber.

The establishment quickly caught on and became a hot spot for movie stars and other Hollywood elites. Even back then, when we didn’t live in quite the celebrity-obsessed society we have these days, acceptance from that crowd was a sure way to launch a fad. Gantt himself became known as “Don the Beachcomber,” and he wound up legally changing his name to Donn Beach.

Victor Bergeron opened a restaurant in San Francisco called Hinky Dink’s in 1934. In response to Don the Beachcomber’s success, it became increasingly Polynesian in décor and theme. It was rebranded Trader Vic’s, with the first franchise opening in 1940 in Seattle. Gantt and Bergeron were amicable competitors, and both chains spread across the country, spreading tiki culture with them and spurring the founding of new similar bars and restaurants.

In 1939, California’s World’s Fair, the Golden Gate International Exposition, included a celebration of Polynesian culture as part of its “Pageant of the Pacific” theme, which gave a significant boost to the culture’s visibility in the US. And the tiki craze continued to branch out, increasingly influencing architecture, interior design, the various arms of the entertainment industry, menus at restaurants and bars that weren’t primarily Polynesian in theme, and more. Even tiki-themed motels and apartment complexes sprung up.

Tiki Culture After the Craze

The Vietnam War and its profound effects on American society were stifling on the tiki craze. Suddenly, those remote Pacific beaches weren’t such happy places, and people in the US were becoming a little more wary of insensitivity toward indigenous people (such as drinking rum cocktails from mugs that look like Maori statues created to honor ancestors).

In 1972, a famous episode of The Brady Bunch set in Hawaii featured a tiki idol that came with a curse. Some historians and mid-century cultural commentators point to this as the symbolic but definitive end of the tiki craze.

Of course, the tiki phenomenon never completely disappeared. There was a resurgence of tiki food and beverages in the 1990s, particularly in craft cocktail bars. Today, tiki culture is largely relegated to touristy places and considered a whimsical (if not kitschy) retro footnote, particularly as compared to the more elegant and enduring mid-century modern style that flourished at the same time. Still, tiki lounges can be found across the country to this day, and some retro and mid-century modern enthusiasts proudly entertain in their backyard or basement tiki bars.