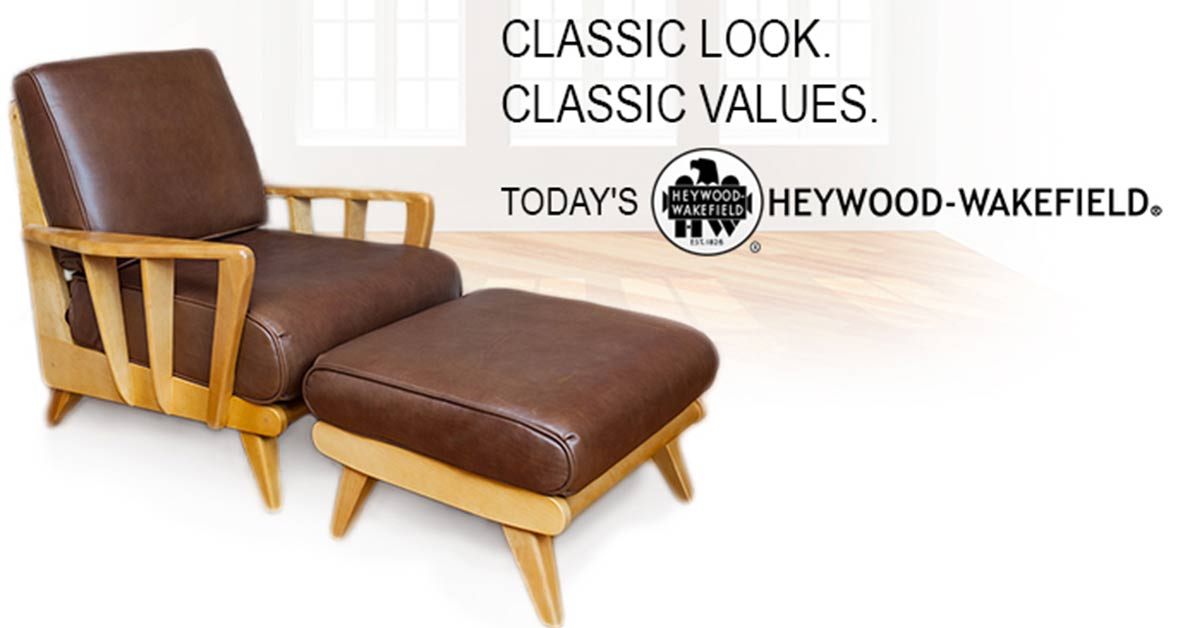 There are still many people who do not realize that the incredible mid-century modern styles of 1940s and 1950s Heywood-Wakefield furniture did not disappear forever when the original company went into bankruptcy in 1979.

In 1992 the name and trademark were rescued by and reassigned to the South Beach Furniture Company, Inc., a Miami company founded in 1984. Since that time, the new Heywood-Wakefield company has reintroduced a surprising array of the original streamline, solid blond wood styles – and added a few of its own. So those who place a value on American-made furniture (and there are quite a few) will be pleased to learn that the new company carries on the tradition of manufacturing fine, solid wood furniture right here in the USA. That’s right: quality American-made furniture is once again available.

Considerable effort has been made to keep modern production of Heywood-Wakefield solid wood furniture as true to its origins as possible. The same species of wood – Northern Yellow Birch – is still used, but in fact, the new company invests the extra time and expense to have the wood selected for higher color and grain pattern, right at the sawmill, than was originally used. Heywood-Wakefield today uses a lighter-colored finish than previously, so consistent grain pattern is even more important than it was 60 years ago. The effort is made early in the manufacturing process to ensure that only the best-looking lumber makes it into their products.

Following the theme of 100% American-made furniture, the lumber is obtained from well-managed professional New Hampshire tree farms, where best environment practices are adhered to. While birch is not an endangered tree species, modern forestry practices dictate that for each tree harvested, two are planted.

Everything produced by the new Heywood Wakefield furniture company is built from solid wood components – you won’t find any particle board, veneer or plywood parts, except for minor features such as drawer dividers and backs of case goods.

New Heywood Wakefield furniture is produced in two separate locations. Wooden furniture is produced in north-central Massachusetts, while upholstered items including davenports, club chairs, etc., are made in western North Carolina. It is worth noting that the new company’s plant is located only six miles from the original company’s location in Gardner, Massachusetts.

The Amber finish applied on new Heywood Wakefield furniture is lighter in color than the wheat and champagne finishes originally used on furniture produced by the old company. This color closely matches vintage Heywood-Wakefield that has been re-finished to a “natural” color, and while not identical to either wheat or champagne, works very well with either – as virtually hundreds of owners of the new furniture will attest. Hand-rubbing of table tops and other flat surfaces is a practice that has been carried over and is used by the new company today for this iconic, American-made Mid-Century furniture.