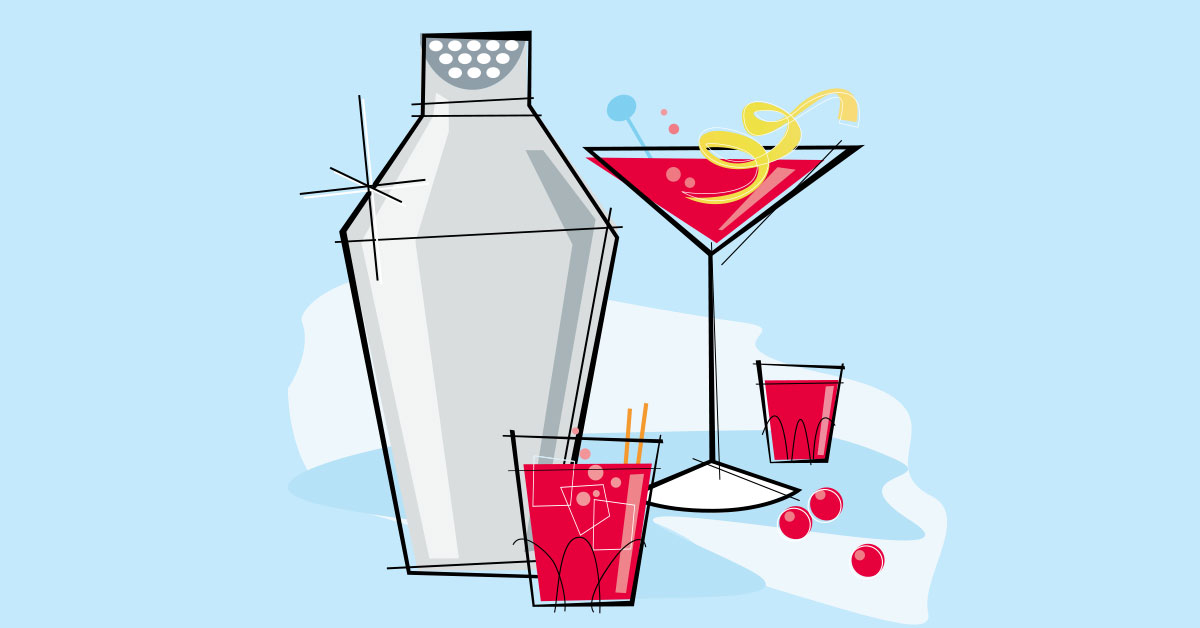 While cocktails have a surprisingly long and fascinating history, the 1950s and 1960s saw a definite surge in the popularity and diversity of mixed drinks in America. Existing cocktails became far more widely consumed, but it was also a golden era of new cocktail inventions.

If you’re hosting a 1950s themed party, plan your drink menu around some of these beloved cocktails from the era. Of course, you don’t have to throw a party to enjoy them. While most mixed drinks don’t have one official preparation, and many have changed a little over the decades, we’ve included a link to a classic recipe for each cocktail.

This fun and fizzy beverage was invented in the early 1950s in Las Vegas in reaction to nearby nuclear testing in the Nevada desert.

Its heyday was during the Civil War, but this cousin of the better-known Mint Julep enjoyed a big resurgence in the mid-century years among imbibers with a serious sweet tooth.

A US Navy surgeon named Thomas D. Gimlette allegedly created this lime juice-laden drink around the start of the 20th century to supply vitamin C to sailors as a scurvy preventative. Not bad medicine.

Despite gin’s enormous popularity in the 1950s and ’60s, vodka martinis were more en vogue than their gin counterpart at the time. Still, this citrus-heavy gin martini was a widely embraced variant.

Rickeys are highballs made with gin or bourbon, half a lime, and carbonated water, named after Colonel Joe Rickey, credited with inventing the first in 1883. This gin version was hugely popular in the 1950s.

This rich, sweet, minty after-dinner drink has a pleasant green color derived from its crème de menthe. It’s said to have originated at Tujague’s, a famous bar in the French Quarter of New Orleans.

The iconic drink to spring forth from the mid-century tiki culture craze, this rum-based beverage was either invented at Don the Beachcomber or Trader Vic’s.

This famous whiskey drink has a much-debated history and many variations, but it’s commonly held to have originated in the early 1870s at New York City’s Manhattan Club.

Undisputed champ of tropical frozen alcoholic beverages, this rum, pineapple, and coconut concoction really represents its Puerto Rican origins. It was invented in the 1950s, and its name translates to “strained pineapple.”

This somewhat forgotten sweet, creamy pink concoction was a go-to favorite of stylish women in the 1950s. It’s a great option for adding retro pizzazz to any party.

Rum enjoyed a major boost in popularity and cocktail use in the 1950s, particularly at tiki bars. This drink, believed to have been invented in the late ’50s, is commonly credited to the Holiday Isle Tiki Bar in Islamorada, Florida.

First invented in the 1920s as a gin and grenadine drink, the version popular in the 1950s and known today is made from vodka, cranberry juice, and grapefruit juice. It’s a classic summertime drink.

Achieving a particularly sophisticated, citrusy flavor from only three ingredients, this Prohibition-era cognac drink is now strongly associated with the mid-century modern era.

Like a heavily spiked fruit punch, this beverage was created in the early 20th century at the Long Bar in Singapore’s Raffles Hotel. It perfectly satisfied that typical 1950s and ’60s craving for sweet, fruity, exotic mixed drinks.

Few cocktails are as strongly associated with the 1950s and 1960s as this gin sour drink, though it dates back to the mid-1800s.

Love the mid-century modern era? Then Sign Up Now!