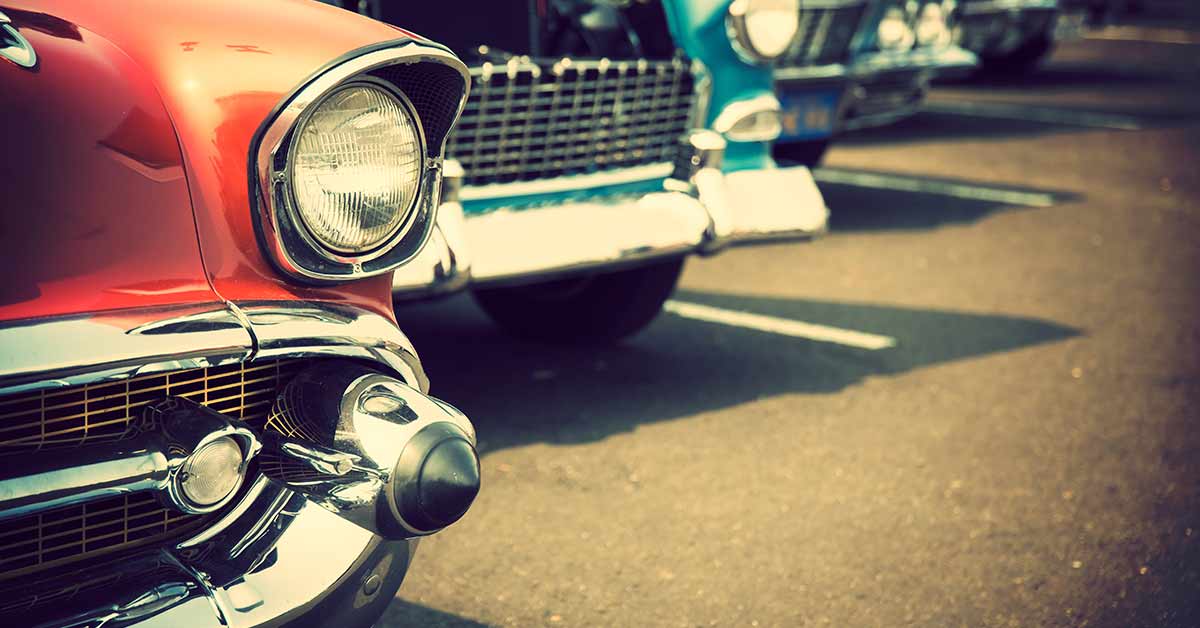 Is there anything cooler looking than the classic cars of the 1950s? Probably not. You don’t even have to be a car enthusiast to appreciate these beauties.

The cars of the 1950s certainly weren’t the safest vehicles, but the decade was a golden era of automotive innovation, especially where design aesthetics were concerned. Cars were stylized with sweeping lines, chrome, and fins that gave them a sleek, sexy look. Many models were hardtop convertibles. Performance was being greatly enhanced, leading to the birth of the sports car segment, and there was ever-increasing emphasis on luxury cars.

Here’s a quick look at 10 classic cars from the 1950s that really made their mark on the automobile industry and mid-century American consumers:

This may very well be the single most iconic automobile of the 1950s. This hardtop styled as a convertible with a nondetachable solid roof was a revolutionary design that set the standard for the decade and beyond. The first generation of this classic car was produced from 1950 through 1954.

Undeniably one of the all-time coolest sports cars, it was only in production from 1953 to 1956, made by Britain’s Donald Healey Motor Company. The “100” in the name referred to the vehicle’s ability to reach 100 miles per hour.

This expensive ride was part of GM’s series of special limited edition luxury convertibles introduced to mark the brand’s 50th anniversary. Any option available at the time was available in this car, which featured a waterfall grille, full-cutout wheel openings, sweeping sides, and other hallmarks of the era’s automotive design.

When you think of the flashy, shiny chrome look of classic cars in the 1950s, you might just be thinking about this car. A flagship vehicle for Cadillac, it was an expensive luxury convertible first introduced in 1953 as part of the same 50th anniversary series mentioned in the previous entry.

This was the first Corvette, now one of the world’s most beloved names in sports cars. When it debuted, though, people thought it was strange looking. Their performance and handling weren’t actually so hot at the time, but this car deserves mention for pretty much establishing the sports car genre in America.

Decked out similarly to the iconic Bel Air, this was one of the first station wagons, offering plenty of room for the whole family and their stuff. It was soon representative of suburban America, which had become the idealized version of family life in the years following WWII.

The predecessor to low-riders and cruisers, this was Ford’s answer to the Corvette, which was quickly gaining in luxury and sports car market shares. Its comfort, impressive horsepower, and affordability as compared to other luxury and sports cars, plus its cool look and use in many popular movies of the day, made this car an almost instant success.

This was one of the most desirable luxury vehicles of the 1950s. It was sleek and simple, but its exorbitantly high price was too prohibitive for real success. In fact, it was one of the most expensive cars in the world; when most were retailing for under $2,000, this one went for almost $10,000 (equivalent to about $90,000 today).

A beloved British sports car, this is one of Jaguar’s most famous models ever. It debuted in 1957, and its curves spoke loud and clearly to the day’s most sophisticated taste. In a number of design aspects, it marked a significant departure from Jaguar’s earlier XK120 and XK140 models.

1958 was the only year Buick produced this car—which it previously made from 1936 to 1942—in the 1950s, but it’s still symbolic of some of the best and worst of the decade’s autos. In an attempt to make a statement, this large vehicle was totally overstylized, particularly with an excess of chrome and exaggerated aesthetic touches.

Love the mid-century modern era? Subscribe to get our original content celebrating the times in a monthly email!